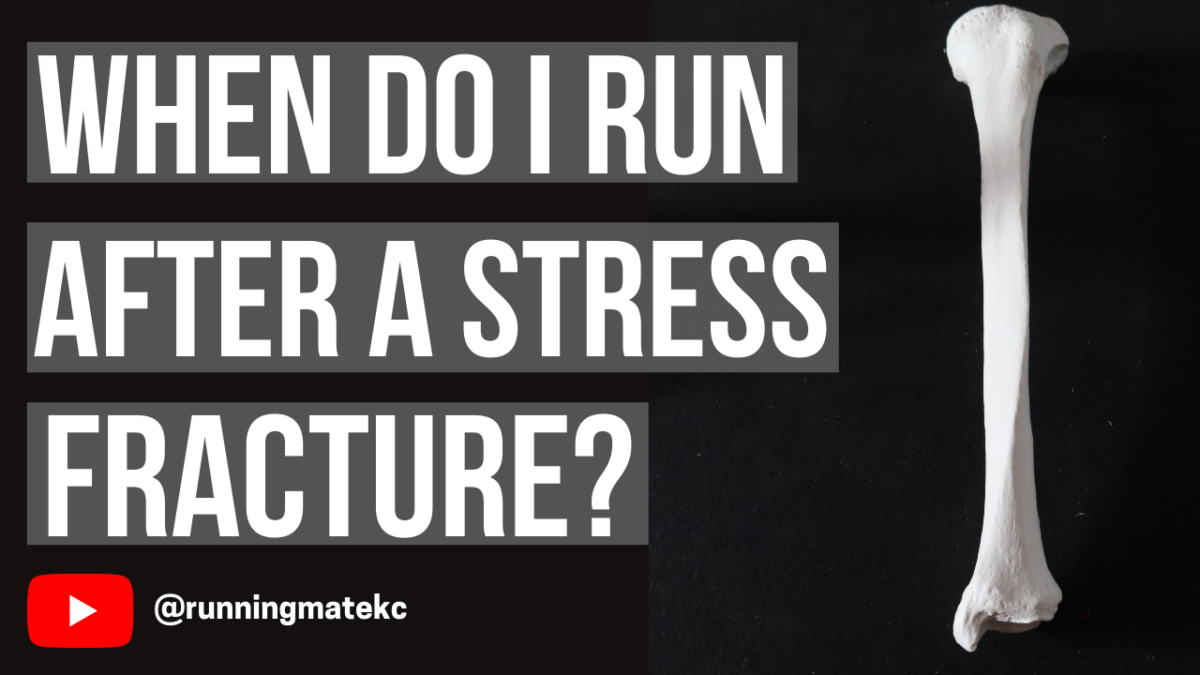 The first question that a runner asks after getting diagnosed with a stress fracture is when can I run again? There’s a lot of reasons why bone stress injuries are difficult, I want to dive into a couple of them today. One factor that we have to analyze whenever someone develops a stress fracture, is what their bone mineral density is like. Your bone mineral density is how much bone is present in your body.

Different people have different amounts of bone, some are more dense, some are less, and the amount of bone that is present is a really important indicator for how strong someone’s skeleton is. Having a strong skeleton tends to decrease our risk of developing stress fractures. The hard thing about running is that runners tend to not develop as strong of skeletons as people that play football, basketball, things that involve jumping, stopping, starting, cutting, all these different movements that force our bones to adapt to a better degree. That’s a really important reason why the rehab from these and the prevention of these with endurance athletes is difficult.

This is one of your bones. This is your tibia. Now, your tibia on the outside looks very similar all the way around, and what we see is that if we were to snap this thing in half that there would be two types of tissue present inside this bone. The first of those tissues would be cortical bone. Cortical bone is super strong and resilient, it is more present on the outside of our bones, and it is represented by this J-Cup.

Now, this J-Cup sits on a squat stand and helps support the bar. It’s very, very strong, it’s really good at dealing with stress. This is what your cortical bone is like that lines the outside of your bones. When we get inside your bones, we see that it’s more spongy in nature. It’s more meshy. It’s job is to help deal with a lot of metabolic processes. It’s affected, to a greater degree, by our nutrition, our hormone levels, and lots of different things like that. Together, these form a comprehensive unit that allow our bones to deal with the stresses of running.

What we see is that there’s times when these aren’t in the best position, where we have a little bit less of each of these than we would like, and we’re not able to deal with the stresses of our sports as well. Why does any of this matter? Well, there was a really interesting study that was done by Pope and colleagues last year that followed 30 runners after they got diagnosed with a tibial bone stress injury, the most common bone stress injury for runners. They followed them up to a year to see what happened with their bone properties during that time period.

Now, during the first 12 weeks of that process, we saw that their bone mineral density, the strength of those tissues, both the cortical bone and the trabecular bone, it got a lot worse. We think that’s due to the fact that they just weren’t doing as much, so when you’re not running and jumping, maybe you’re going to the gym, you’re doing these other things, your bones have to stay strong because they’re getting reminded of that with our day-to-day tasks.

If you’re not doing that, we see that tends to get worse. We also see this in studies that look at patients after an ACL reconstruction, we see that when astronauts go to space, that when we stress our skeleton to a lesser degree it gets worse. Now, as they continued to follow those 30 runners over that entire year, they saw that most of their bone properties returned back to normal, so their bone mineral density and how much bone was present, that came back to normal but it wasn’t for everybody.

That’s what we see in the real world as well, not just in research studies, is that these can be very easy to re-aggravate. I wanted to go through two different things I think can help so we don’t see this trend moving forward. The first thing we need to do is we need to be more realistic in our timeframe after injury. When you get that date to return to run, again, it’s normally a couple months after the initial injury, that’s the date that you can start running. That’s very different than you stepping to a starting line and being ready to give it your all and not sustain an injury.

Finally, that third phase is returning to competition. Again, you’re able to show up to a race, you’re fit, you’re ready to go, and you’re ready to put it all on the line. That time period, depending on the person, that could take up to a year and we don’t have those conversations early on with runners. The problem with not having these conversations is that we make hasty decisions.

We need to be better during the rehab process of stressing people’s skeletons. There’s normally a stage after an injury that we have to rest a little bit. Maybe you’re in a cam boot, maybe you’re on crutches. Again, depending on the region and the type of stress fracture that we’re dealing with, there needs to be a little bit of rest at the start, but we need to be really mindful about stressing that bone over and over and over again and making that progressively harder as they go through the rehab process.

Thanks so much for watching, I hope you found this video helpful. Make sure to comment with any questions below and have a great rest of your day.