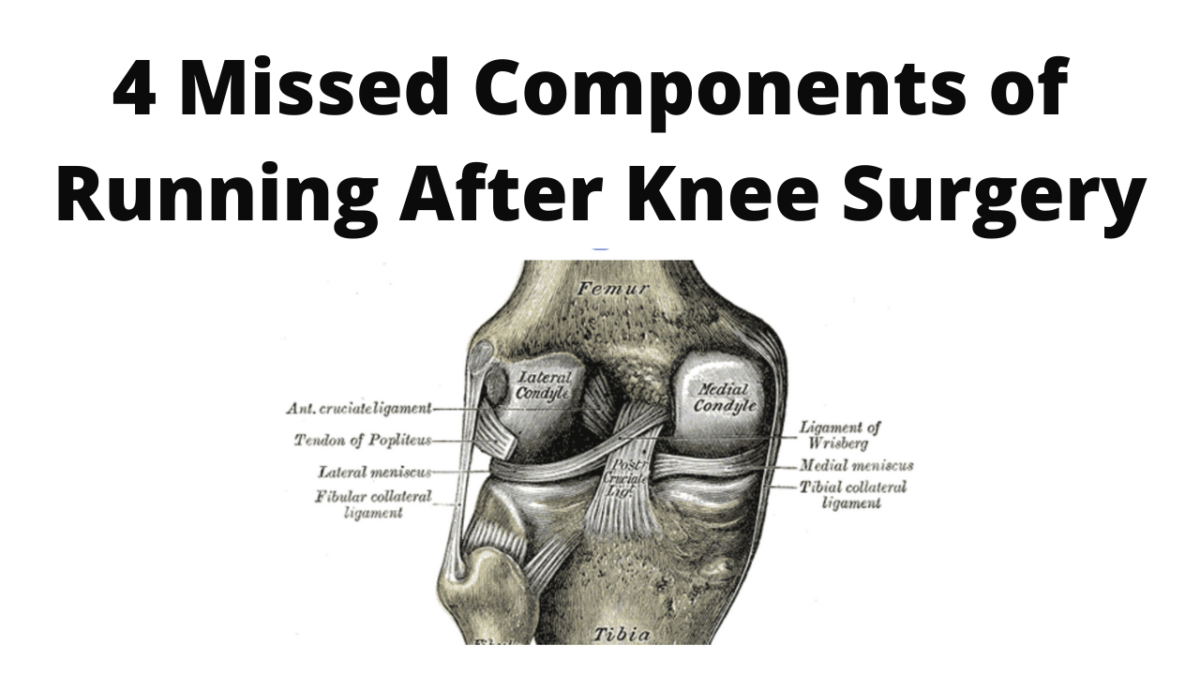 Returning to training after knee surgery is challenging. Whether you’ve had a meniscectomy, ligament repair, or other procedure, the road back is long and bumpy. We can do a better job of smoothing out the path.

Running is seen as a timeline and not a skill to sharpen after surgery. The first question a runner asks after knee surgery is, “When can I run?”

Runners want a specific date. The exact time they can lace up their shoes and return to their flight phase. We can typically give general time frames for recovery, but giving a specific date can be challenging. There are many things they need to achieve before returning to the track, roads, or trails. The overall progress through physical therapy is very similar regardless of the surgical procedure.

Many steps exist within each goal, but the overall process is somewhat similar whether a patient has undergone an ACL repair, microfracture, or other operative procedure. Unfortunately, a lot of runners return to running too quickly.

We can break the running gait cycle down into two phases:

A majority of our time post-operatively is focused on restoring the stance phase portion. Performing single-leg, closed-chain exercises is a vital part of successful rehabilitation. These types of exercises mimic the position and demand placed on the knee while running.

An often overlooked part of returning to running is restoring a runner’s swing phase. Healthy and injured runners exhibit significant differences in their swing phase mechanics. Some exhibit more knee flexion, some less, etc. Look at the considerable difference in swing mechanics between two of my high school clients. Both are NCAA-level runners who have been injury-free for the past two seasons. Yet, they exhibit very different swing phase mechanics.

Running is a demanding sport. The body has to deal with a lot of force, and that force happens quick. With every foot contact, we ask our body to support two to three times our body weight. If a runner runs at a cadence of 180 steps per minute, for a 30-minute run, that’s 5400 foot contacts. Your body better be ready for it.

Make them produce force QUICKLY. Simply mastering your bodyweight with single leg challenges is a great place for runners to start when they return to training, but it CAN’T be the end. Getting strong and powerful has advantages not only for overall health and injury reduction but also for performance. Below are two hopping variations I use with healthy and injured runners to improve their “springiness.”

3. Optimizing running mechanics based on pathology

Different running styles load our bodies differently. While there is not an ideal way to run for everyone, there are some things we might want to avoid when dealing with a post-surgical patient.

One of the most challenging aspects of progressing a post-operative patient back to running is managing “joint issues”. Damage to the joint surfaces, either through the surgical process (ex. meniscectomy, microfracture, etc.), changes the knee joint’s passive stability.

These deficits in joint structure can lead to changes in the joint’s passive stability and affect the recovery process. We need to avoid any excess stress on the knee, both due to lack of strength and power and mechanics that put more stress around the knee.

Running at a lower cadence puts more demand on the knee than running at a quicker pace. In general, having our foot on the ground for a more extended amount of time is probably not the best idea for a runner following knee surgery. Cadence manipulation can be highly beneficial at reducing loads throughout the knee and should be assessed when a patient is getting back to running. If a runner hovers around 150 steps per minute, it’s probably a good idea to bump up their step rate 5-10%.

4. Speed and variability with returning to run

Running is a series of complex skills that are important to master. Variations in a runner’s speed and environment will change the demand on different structures of the body. Running a 50k trail race is very different than a 5k road race.

Slogging out many slow miles at a low cadence isn’t the best bet for a runner following knee surgery. Having small amounts of variability in speed, surface type, and overall training environment allows the body to adapt to many different stressors. Adding in walk breaks throughout more extended efforts can be crucial.

Returning to running after surgery can be tough. More than anything, runners need to PAY ATTENTION and be patient! That will help them get back to the things they enjoy ASAP.