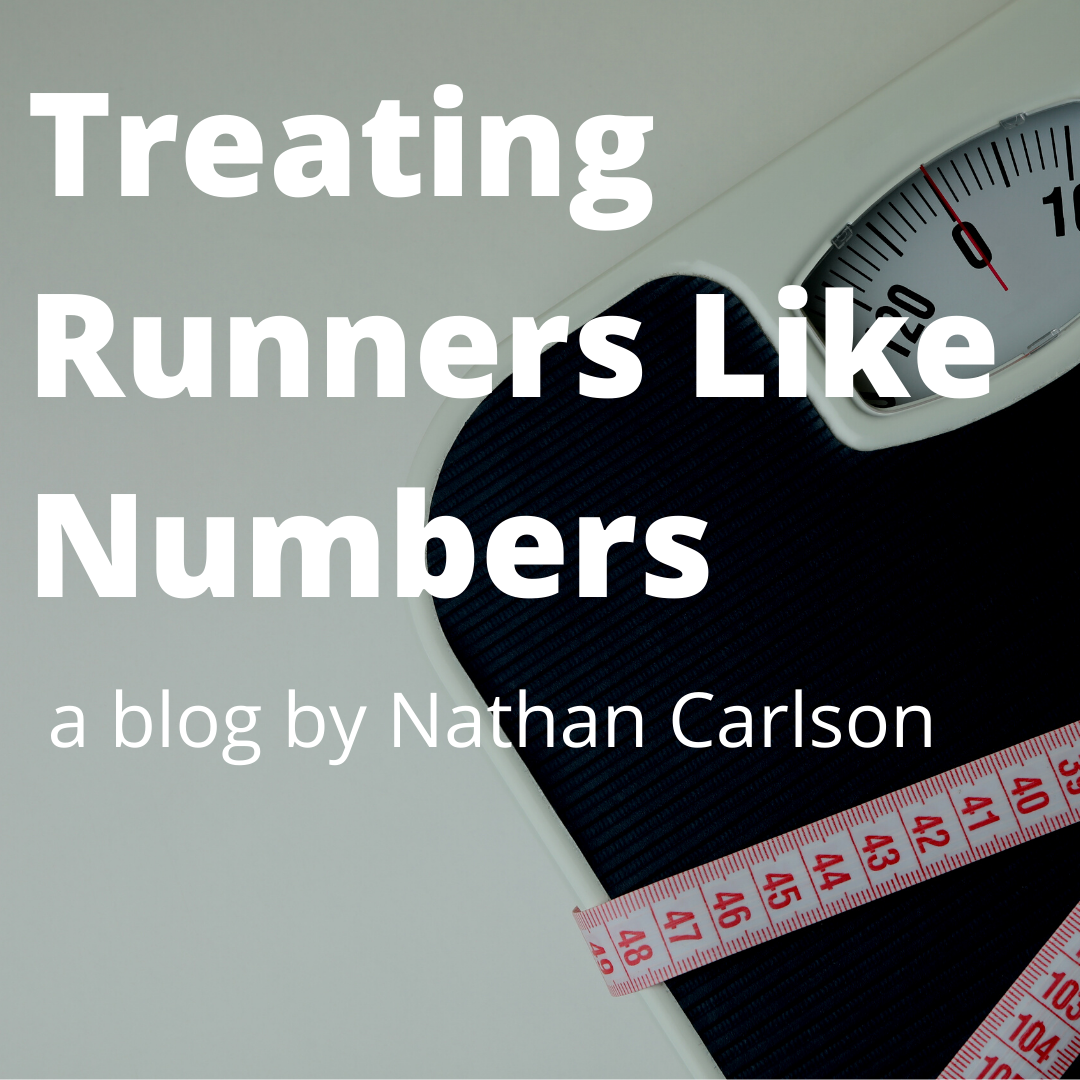 It usually starts with a single conversation: a few words, a simple comment, or chatter at a meet. A seemingly meaningless interaction that sets the stage for lifelong troubles.

I was finishing up a session with one of my long-term clients when the conversation quickly switched from superficial topics to her experiences growing up. She spoke on struggles with an eating disorder sparked by a single interaction in 1988. Now in middle age, she still consciously works against the outcomes of that interaction. I’ve had MANY athletes tell me they can trace their eating disorder, battle with depression, or suicidal thoughts to ONE comment by a coach, teammate, parent, or health care provider.

We’ve got a long way to go in the running world. We’ve made a lot of positive improvements around mental health, body image, and nutrition. But, we still have articles highlighting experiences like The University of Oregon’s Track Program. Some will scoff and say, “You know what you signed up for! Toughen up!” I hope that crowd is getting smaller every day. There’s a lot of concerning talking points from that article. I want to highlight my experience in this environment, how we can use medical testing for good, and what red flags we shouldn’t treat as normal.

The article focuses on DEXA (DXAs) scans. DXAs help diagnose low bone mineral density, a common problem in distance runners. Denser bones generally mean stronger bones that are less likely to fracture. DXAs also give us information on body fat and lean muscle tissue and provide beneficial information to dietitians, rehab professionals, strength trainers, and physicians. While this information can be helpful, it can be harmful in the wrong hands.

Running is a sport of numbers. Mileage, pace, and personal records. All numbers you can easily compare against over time. It’s easy for runners to view those numbers as a reflection of their identity and self-worth. Inappropriate discussions around body weight, body fat percentage, and other “numbers” can be incredibly harmful. The plan to weigh less routinely does more harm than good.

When do we have a problem?

When training in a team setting (collegiate, professional, etc.), there are generally many “decision-makers” in an athlete’s corner: coaches, psychologists, strength coaches, massage therapists. The list can be quite long. It’s essential that everyone on the “team” is on the same page and working towards the common good. Each team member must understand their role in the big picture of managing the athletes. They also need to realize the areas of management they have no business discussing.

I’ve interacted with many coaching staffs over the last decade. Some work well together and others are siloed, egotistical, and unwilling to collaborate. The biggest concern I see is when a coaching staff is trying to run the medical side of an athlete’s care. Usually, this potentially pathological approach is justified by said coach because they’ve brought home lots of banners and trophies. The attempt to micromanage an athlete is blatant. I want to go through some of the red flags that should not be viewed as normal.

Is the coaching staff arguing for specific medical interventions?

Coaches’ perspectives should be in the conversation, but they aren’t medical providers. Those decisions lie with the team physician, ATC, chiropractor, etc. You wouldn’t want the team physician designing your track workout. Coaches shouldn’t be attempting to make medical decisions.

Is the coaching staff funneling athletes to providers outside of their organization?

Outside consults in collegiate sports are common. I get a fair number of referrals to help college runners troubleshoot an injury. However, if a coach is consistently sending athletes outside of the school’s medical team the warning lights should blink. This is especially true if the athletes are consistently getting conflicting messages from the team medical staff and outside providers.

Is the coach willing to refer outside of the college system?

This is the exact opposite of the last question. Is the coach trying to control the situation by not letting the athlete “out of their control”?

At the end of the day, runners should be treated as human beings. There are so many great coaches that value their athletes as people as much as athletes. As a college athlete, there is a performance expectation, but that shouldn’t come at the expense of their mental health and longevity in the sport.

Thanks for taking the time to read!
If you enjoyed it, be sure to sign up for my newsletter below!