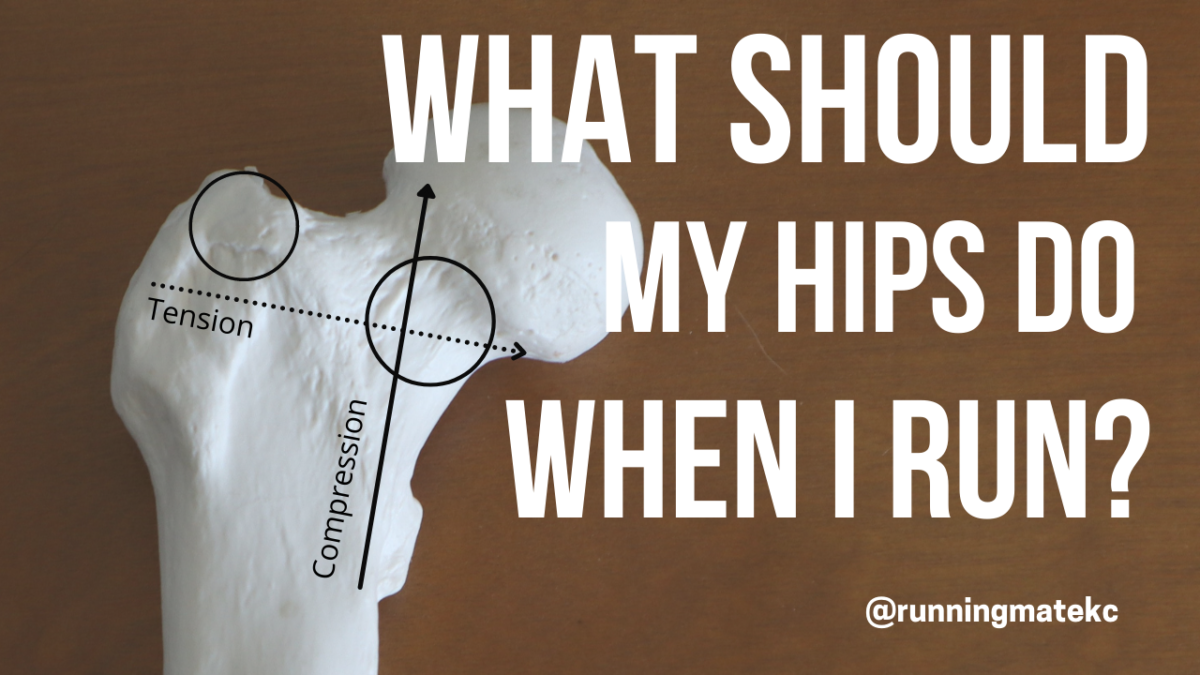 The hip gets blamed for a lot of running problems.

What does the hip actually do?

In this video, I break down the key things you need to know about hip anatomy, how our hip functions when we run, and what you can do to develop strong, sturdy hips for training and racing.

Let’s talk about your hips. I don’t know about you, but to me, I think the hip is the bane of most runner’s existence. It’s the reason why they get hurt. It’s the limiting factor in their ability to race fast. And generally it’s just a source of problems and frustration. But what are your hips actually have to do when you run? And how do we make sure they’re ready to deal with that? Now the hip is a ball and socket joint, meaning that the head of the femur is the ball, which attaches to your pelvis, specifically the acetabulum, or this little curved-in section right here. Together, these form one unit that allows our hip to go forward and back, side-to-side and rotate in and out as we go through our sports and day-to-day activities. All those motions happen because of the muscles that attach from our pelvis to the bones of our lower body.

While the hip is dynamic enough that it allows us to have all those different movements, it’s main job is to support everything from our head down to our pelvis in an upright position as we go through our day-to-day tasks and sport activities. When we look at the acetabulum, or that point where the hip attaches into our pelvis, it’s formed by three separate bones. The ilium, the ischium, and the pubic bone. Those three bones come together and form the acetabular cavity or this indention right here where the head of the femur attaches. Now this relationship is really important because the blood supply or the blood vessels that supply the femoral head and the rest of our femur, they come through that cavity. Then this section, which is shaped like a horseshoe, is our main source of weight-bearing support. That relationship is really important.

Now, as we come down to the hip, we have what’s called the femoral neck and that’s this little section between the femoral head and then the rest of our femur. This is an area that’s of a lot of concern to many runners. The most common site for us to get a bone stress injury in our femur is the femoral neck. And when we look at specifically what happens when we’re weight bearing, when we go to put our weight onto one leg, the most amount of force happens through the inferomedial, or the down and to the inside portion of the femoral neck. If we examine the femoral neck, we see that that area tends to have a little bit more bone and that bone tends to be a little bit stronger because it’s under higher amounts of stress throughout our day-to-day activities. We see the opposite on the up and outside portion of the superolateral portion of the femoral neck, where there’s not as much bone there, it’s not as strong. And it has to deal with more tension or more pulling forces.

I promise there’s a point to all these specifics. When we look internally inside the femoral neck, we see that there’s a similar asymmetry where there’s portions of the bone that are more dense in different sections because of that asymmetrical force.

It’s important to understand the unique nature of the femoral neck and the rest of the proximal femur because when there’s a fracture, there’s a chance that the arteries or the blood supply to that area gets disrupted and that can put us at an increased risk for developing what’s called avascular necrosis. That’s something that no runners want. So let’s recap really quick.

Our hip has to go through a bunch of different ranges of motion. It doesn’t always have the best blood supply. And it’s in a unique position because it’s a little bit asymmetrical and it has to deal with a lot of the load-bearing forces when we’re walking, running and going through our sports. It’s really common for runners to report needing to improve the mobility of their hip. It needs to be more flexible. They have really tight hip flexors. They have really tight glutes.

There’s something that is impairing that hip’s ability to move through a big range of motion. But what do we actually need to run? We’ve studied this. colleagues examine exactly this. And what they found was that we really only need about 65 degrees of hip flection and about 10 degrees of hip extension. We need a minimal amount of movement to the inside and outside, but not that much. Distance running is more of a mid-range sport. When people start to talk about having tight muscles or tight areas in their hips, it’s not necessarily a concern to me because normally they have the requisite motion to be able to get through the running gate. Now, the types of environments that we’re running in are going to have a different effect on the demands of the hip. If we’re going uphill, we’re probably going to have to engage a little bit more hip flection.

If we’re running at a faster pace, we see the same thing. Faster runners tend to get their knee higher up off the ground, which requires more mobility throughout the hip joint. To me, this doesn’t mean they need an exaggerating stretching or mobility routine. They just need to focus on going through controlled hip flection in an upright position. Marching is a great way to do that. If we want to make sure we have really strong and sturdy hips, we want to stress it in different ways in the weight room and with drill work. I’m going to break that down into three different types of movements I want to incorporate. The first one is hip-specific drills. These are exercises that stress the hip in different ways, going through all the motions that I previously discussed. Hip airplanes, squat clocks, and bridge with straight leg raise variations are some of my favorites to incorporate those hip-specific drills.

We also want to focus on being in an upright position and going through smooth single leg work, marching variations are a great way to accomplish this. And lastly, we want big movements, things like trap bar dead lifts, rear foot elevated split squats, and other squat variations, that put lots of stress on the hip and allow it to adapt to be better able to deal with the demands of running. And all those need to be progressed.

It’s really common for runners to incorporate some level of hip exercises in their programming, but often it’s of a very low level nature. Normally these are exercises that they get in the rehab setting or they find online somewhere. And like any aspect of our training, they have to be progressed. If we keep doing the same thing over and over, we’re not going to see that same benefit from continuing to do those exercises. So we need to increase the weight, the speed, or another variable with these movements and continue to do that over time. Otherwise, we’re just going to stay the same. Thanks for taking the time to watch, make sure to like, subscribe, comment with any questions below and have a great rest of your day.